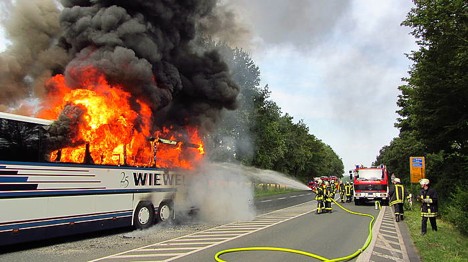 “When I saw my bus blazing within seconds, I was shaking like a leaf,” said driver Lothar Fetting after the incident outside the western German town of Werne on Thursday.

The children, aged between 12 and 14, were on a religion class trip to a Hindu temple in the neighbouring town of Hamm when things went wrong.

“The bus suddenly stopped on the slip road. Then we noticed smoke at the rear,” teacher Birgit Berendes told the Bild newspaper. “It was already rising around the children on the back seat.”

Driver Fetting acted calmly. “I opened the door at the front straight away and called the children to get out quickly but safely,” the 57-year-old said.

It was a move that apparently saved everyone’s life. “The driver did exactly the right thing,” said Fire Chief Heinz Westbomke. “If he’d opened both doors, then the fire could easily have ignited through the whole bus really fast.”

As it was, the fire broke out just minutes after the children got out, and 60 firefighters arrived at the scene.

Another teacher, Julia Krickau, added: “Looking at that burnt-out wreck, I realised how lucky we were.”

The children were taken back to school in another bus.