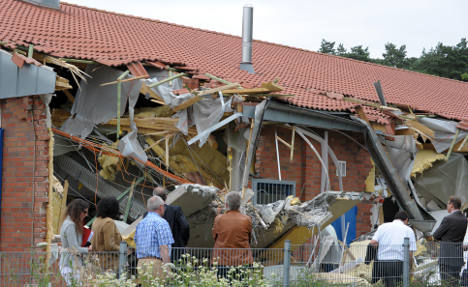 A man living near the Lidl supermarket in Brüggen near Mönchengladbach was woken up by the noise in the early hours of Monday, and called the police.

When officers arrived at the scene, they found the digger with the engine still running, but no robbers. The neighbour had seen four men leaving, a police spokeswoman told The Local.

Police found a red Ford Transit van which had been stolen from a nearby town the previous night, seemingly ready for the supermarket safe to be loaded up.

But although the would-be thieves had torn a huge hole in the roof and smashed down a wall, they did not have enough time to get to the money – and fled before the police arrived.

They left in a British silver Volvo car, but ditched it after about a kilometer – on a road which leads across the border to Swalmen in the Netherlands.

“We are currently in contact with colleagues in the UK to see if we can trace the car, and to see if that too was stolen,” the police spokeswoman said.

“We found receipts from the supermarket in the car, showing that it had been used in this case.”

They have released a photograph of the British car which had the registration number SP07 FNX, and are appealing for public help. Calls with information about the car or its owner should be made to the Viersen police on 02162/377-0.