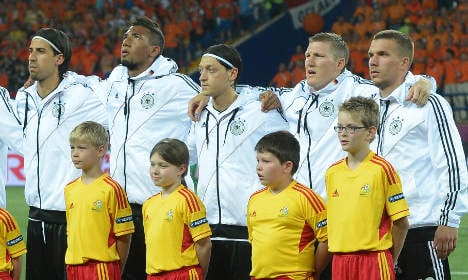 Politicians from Angela Merkel’s Christian Democratic Union (CDU), and its Bavarian sister party the Christian Social Union (CSU), called for Germany’s national footballers to be obliged to sing the national anthem, in the hope of generating the extra patriotic fervour necessary to defeat the likes of Italy and Spain on the pitch.

“It should be part of the etiquette, that the players sing along,” Hesse Interior Minister Volker Bouffier told the Bild newspaper on Monday. “After all, they’re playing for the national team, not for themselves! It’s embarrassing enough that we even have to discuss it – really, the players should think of it themselves!”

Bavarian Interior Minister Joachim Herrmann sang from the same hymn book. “The national anthem belongs to international matches and the national team,” he said. “Anyone who doesn’t feel like it should stay at their clubs.”

The politicians were backed up by at least one German footballing legend. Franz Beckenbauer, who captained Germany on their way to World Cup and European Championship success in the 1970’s, introduced an obligation to sing the national anthem when he became coach of the national side in 1984.

“That’s how we became World Champions in 1990,” the Kaiser commented.

Coach Joachim Löw always sings the national anthem, but does not oblige the players to do so, and there has been some criticism of players, like Mesut Özil and Lukas Podolski, who choose not to sing along before the game.

But Federal Interior Minister Hans-Peter Friedrich, also of the CSU, struck a note of discord. “One doesn’t now need to look for all the possible reasons why the semi-final was lost,” he told the Bayerische Rundfunk broadcaster.