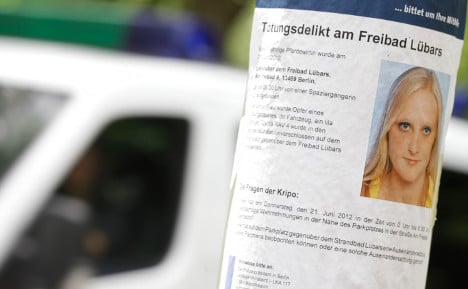 He said the 23-year-old man from Berlin, who was initially considered a suspect in the actual killing, had not trusted himself to kill his 21-year-old girlfriend to get his hands on her €245,000 life insurance.

So he asked a 26-year-old woman to help him. She had ideas about being with him, and promised to find a way to remove her younger love rival. Her 23-year-old brother, who was in prison, put her in contact with the alleged contract killer who supposedly demanded just €1,000 for the job.

Jutta Porzucek, head of the murder commission said the woman, her brother and the killer had all confessed – although the boyfriend had not.

“It is shocking to see with what cold-bloodedness the boyfriend, with his 23 years, went about things that day.” She said even experienced detectives were shocked by the attack.

The man got his girlfriend to accompany him to a car park near the Lübars swimming pool in northern Berlin. Although he had told her it was to meet someone to talk about buying a horse, she obviously realised something was wrong and brought a friend. This scared off the killer, who ditched the plan.

Shortly afterwards, police said, the man persuaded her to go with him and the 26-year-old other woman to another meeting and persuaded her to get into a car where the killer was waiting. They then watched as he strangled her to death.

Her body was discovered on June 21 near the car park.