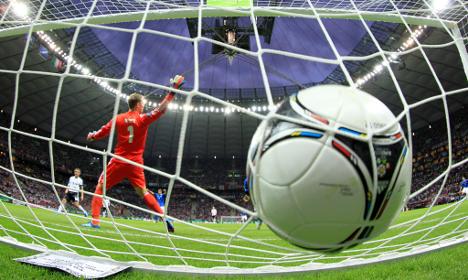 Italy striker Mario Balotelli broke hearts with a first-half header and strike as the inexperienced Germans – the youngest of the 16 teams at Euro 2012 – failed to cope with Cesare Prandelli’s boys.

“The most bitter thing is that this team has so much potential for so much more,” said team captain Philipp Lahm as the Germans’s 15-match winning streak in competitive games was broken. “We were not clever enough,” he added.

The knock-out ensured their trophy drought dating back to Euro ’96 would last at least another two years to the 2014 World Cup, should they qualify.

While Germany had a faint lifeline when Mesut Özil converted a 92nd-minute penalty after a handball by Federico Balzaretti, it was too little, too late.

For all their potential and the impressive attack-minded football they showed in their Euro 2012 wins over Portugal, Holland, Denmark and Greece, Löw’s team clearly had no Plan B when things went wrong.

It is a very, very bitter defeat… We made some stupid mistakes and we shouldn’t have conceded the goals like that,” said Lahm.

Having dropped three of his forwards for last Friday’s 4-2 quarter-final win over Greece, Löw again tinkered with his starting line-up, but this time it back-fired as the Italians ruled the midfield in the first half.

Arsenal-bound Lukas Podolski was hauled off at half-time, striker Mario Gomez also made way for 34-year-old veteran Miroslav Klose after the break, while Toni Kroos barely troubled the Italian defence from the right wing.

“I wanted to strengthen things in midfield, which is why I brought in Toni,” explained Löw. “The goals we conceded came from mistakes, because we weren’t present enough around the area.

“We had things under control at the start, but after falling behind we took more risks and weren’t as well organised, he said. Adding “after going 2-0 down, we had to risk everything.”

Having finished third at the last two World Cups and lost the Euro 2008 final, this is the fourth consecutive tournament the Germans have reached at least the semi-final. Löw’s contract runs until after the 2014 World Cup in Brazil.