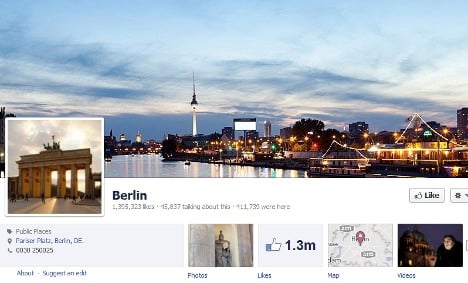 Munich city council figured this on its own at the start of the year, when its Facebook site – complete with 400,000 fans, was suddenly inaccessible to city administrators.

“It came completely out of the blue,” said Lajos Csery, manager of the München.de city portal. “I think we simply had bad luck that we were hit first.”

Berlin has 1.3 million fans on its site, and would be devastated to lose them. “For us, that is an insanely important channel,” said Katharina Dreger from the city’s marketing firm.

“One cannot avoid social networking as a modern city.”

Torralf Köhler, spokesman for the Hamburg.de portal , which also operates the Hamburg Facebook page said, “Not being on Facebook is not an option for us.”

They are desperate not to lose their social networking presence, and are now trying to think of new names.

A Facebook spokesman said the rules were clear on its page where it states, “No-one can represent a geographic place.” Each site must be clearly associated with its administrator – such as “New York – Office of the Mayor” or “Lok Sabha: Parliament of India”.

Munich has already figured out a compromise, initially renaming its page Stadtportal München – city portal Munich – before opting for München.de as a Facebook name.