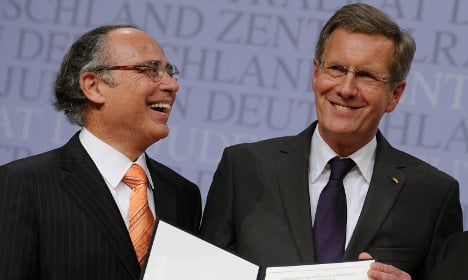 Wulff resigned in February after failing to convincingly brush off a string of unsavoury, money-related allegations – including that in 2008 while he was Lower Saxony state premier, he did not declare a soft loan of €500,000 from a prominent regional businessmen.

Now the spotlight is on his money matters again, after prosecuting authorities investigating hit finances came across the undeclared money while going through Wulff’s private accounts, Der Spiegel magazine said in a report due to be published on Monday.

The German Central Council of Jews awarded Wulff the Leo-Baeck Prize, which includes €10,000, which Wulff transferred into a personal account, according to the magazine.

Suspicions were raised by Wulff’s failure to officially document his receipt of the prize money. On June 4th prosecutors asked the presidential office for information about the money, but the office could not find any documentation of its whereabouts.

When prosecutors contacted Wulff directly about the matter on June 13th he told them he had donated the money to the Chaim Sheba Medical Center in Israel, Der Spiegel said.

Yet the Central Council of Jews only received a message asking if they would approve the donation last Tuesday – seven months after the prize was given.

Although the law does not require those in public office to donate prize money to charity, it is a practice which is expected from presidents in order to keep a “good tone” to their office, wrote the magazine.

Prosecutors will now investigate whether “the use of the prize money” constitutes grounds for initial suspicion needed to start proceedings against Wulff, a spokesman for the public prosecutor’s office said.