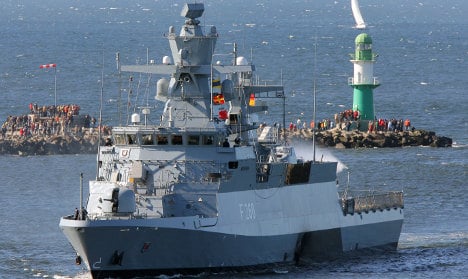 Toxic formaldehyde vapors were found in the engine rooms of the corvette warships, the Bild am Sonntag newspaper reported on Sunday. Anyone in those areas has to wear a gas mask to protect themselves.

The carcinogenic gas was discovered during a routine pollution check of the diesel propulsion engines on the €1.2 billion corvette vessels – small, manoeuvrable, lightly-armed warships – reported the paper.

The paper learned of the problem when commander of the German Navy Vice Admiral Axel Schimpf invited politicians and media representatives on a tour of the “Braunschweig” corvette – currently docked at Kiel – as part of the Kieler Woche sailing regatta last Sunday.

The Parliamentary Commissioner of the Armed Forces, Hellmut Königshaus, is now investigating the problem.

This is the latest in a raft of problems reported with the warships since their launch in 2006 – including defective gears, software and air conditioning systems that had to be replaced.

“The series of mishaps must be resolved and the shipyard must quickly correct the new mistakes,” defence expert and Social Democrat Hans Peter Bartels told the paper.