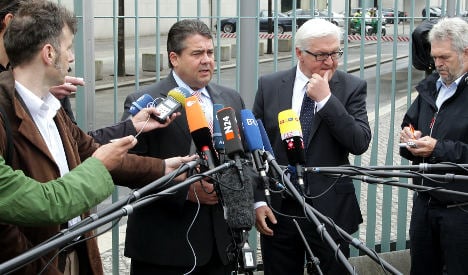 Just hours after the deal was announced following weeks of wrangling between the governing centre-right coalition and main opposition parties, the German constitutional court threw a potential spanner in the works.

A spokeswoman said the court would need up to three weeks to examine a likely legal challenge to the fiscal pact and bailout mechanism, in a move that could delay the ESM rescue fund taking effect as planned on July 1.

The court would ask President Joachim Gauck to postpone signing off on the legislation after its expected parliamentary approval while it studies a challenge threatened by the far-left Linke party, she said.

“In the face of the continuing turbulence in the eurozone, that’s bad news,” the centre-left Social Democrats’ chief whip Thomas Oppermann said of the ESM’s possible delay.

Chancellor Angela Merkel was forced to make concessions in the negotiations with the opposition in exchange for its parliamentary backing next week of the two tools seen as key to fighting the raging debt crisis.

The deal is an “important message for Europe and a signal to the markets,” Volker Kauder, parliamentary head of Merkel’s Christian Democratic Union and a key ally of the chancellor, said.

However the coalition had not given ground on the “mutualisation of debt,” he stressed. Germany vehemently opposes calls, especially by France, for the pooling of eurozone debt to help bring down borrowing costs for struggling countries.

The German parliament must pass the draft laws on the fiscal treaty, a new European budgetary rule book, with a two-thirds majority, meaning Merkel needed to secure opposition backing.

However its quick passage, which the government aimed to see completed by the start of the summer recess on July 6, together with the ESM, had been thrown into question by squabbling between the ruling parties and the opposition.

Since the start of the eurozone debt crisis, the SPD has backed Merkel on key issues, but bolstered by the election of Socialist President Francois Hollande in France, it has pushed its demands particularly hard this time.

Leading SPD members welcomed the agreement which states that budgetary consolidation and growth “belong together” and supports the introduction of a levy on financial transactions.

“Overall, it is a result that I can take to my group with some confidence and recommend agreement of the whole package,” Frank-Walter Steinmeier, the head of the SPD’s parliamentary group, told reporters.

The accord says that faced with resistance from some EU member states, Germany would back a tax on financial transactions based on a core of “at least nine” countries taking part.

Berlin has argued that such a tax should be introduced at EU level but has run into fierce opposition, notably from Britain, which fears it would hurt London’s status as a financial hub.

The leader of the ecologist Greens, Cem Ozdemir, said the government “had taken a step” towards his party.

The deal should allow both houses of parliament to ratify the pact and the ESM on June 29, as planned.

Driven through by Merkel and signed by 25 of the European Union’s 27 member states, the fiscal pact aims to enforce stricter budgetary rules in the bloc and prevent the high public deficits that touched off the eurozone turmoil.

The pact is due to come into force when 12 of the 25 countries have ratified it but so far that has occurred in just a handful of nations.

Designed as a successor to the EU’s current bailout fund, the European Stability Mechanism (ESM) will have 500 billion euros ($628 billion) to help struggling eurozone countries deal with the debt crisis.