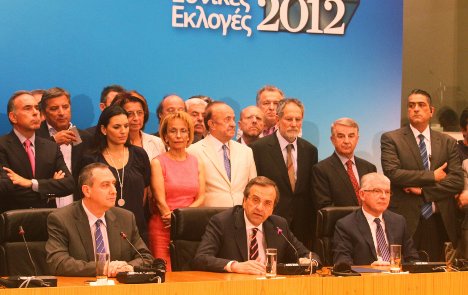 “There can’t be substantial changes in the engagements” undertaken by Greece in the bailout deal. “But I can imagine we discuss again a delay” in achieving the targets, German Foreign Minister Guido Westerwelle said on ARD public television.

The job, spending and wage cuts required under the €130 billion ($165 billion) bailout were a key issue among voters in Sunday’s Greek parliamentary election, with all parties calling for a relaxation of the terms if not outright cancellation of the deal.

Germany has been one of the most hardline eurozone nations and insisted that Greeks have to implement the agreed deal if they want the bailout funds needed to keep the country from going bankrupt and possibly exiting the euro.

Chancellor Angela Merkel congratulated Greece’s pro-bailout conservative leader Antonis Samaras on his election victory and told him she was now confident Athens would abide by its European pledges.

“She stated that she would work on the basis that Greece will meet its European commitments,” said a government statement recounting her phone conversation with Samaras, the leader of Greece’s New Democracy party.

French Finance Minister Pierre Moscovici said eurozone finance ministers would soon release a statement on how they will approach the situation in Greece.

He said that the eurozone will “demand that the engagements taken by the Greeks to keep them in the euro are kept but also pay attention to Greece’s particular situation, the social and economic situation.”

The head of the Eurogroup of eurozone finance ministers, Jean-Claude Juncker, said it “acknowledges the considerable efforts already made by the Greek citizens.”

However, he stressed that currency partners remain “convinced that continued fiscal and structural reforms are Greece’s best guarantee to overcome the current economic and social challenges.”

German Finance Minister Wolfgang Schäuble called the results a “decision by Greek voters to forge ahead with the implementation of far-reaching economic and fiscal reforms in the country.”

But Belgium’s Foreign Minister Didier Reynders said that there is “room for manoeuvre” on the time Greece needs to deliver on bailout commitments.

There is “a margin of possible dialogue on timings for implementation,” the national news agency Belga reported him as saying, although the former Belgian finance minister insisted there would be no “blank cheque” on offer.

A first official estimate said the conservative New Democracy party won the election and would be able to form a pro-bailout majority with the socialist PASOK party.

But even New Democracy chief Samaras has called for the terms of the bailout deal to be revised.

Revising the deal doesn’t come without risks to the eurozone however. Too much flexibility risks calling the eurozone’s credibility on seeing painful but necessary reforms being carried through.

Too much flexibility also risks provoking calls for leniency from Ireland and Portugal, which are struggling to implement austerity policies.

While Germany is ready to show solidarity “what we cannot accept is that engagements taken are considered annulled”, said Westerwelle.

The anti-austerity leftist Syriza party, which placed second, had vowed to tear up the European Union and the International Monetary Fund bailout deal that has given Greece a credit lifeline in exchange for harsh spending cuts.

“There is no other road but reforms,” said Westerwelle.

However there appears to be greater appreciation of the austerity fatigue among Greeks, who are now suffering through a fifth year of recession.

“Europeans also need to help the Greeks return to growth,” said Moscovici on France2 television. “There has to be discipline but also hope.”

New French President Francois Hollande has sought to shift the focus of eurozone economic policy from austerity to growth, and will propose the bloc commit to a 120 billion euro boost.