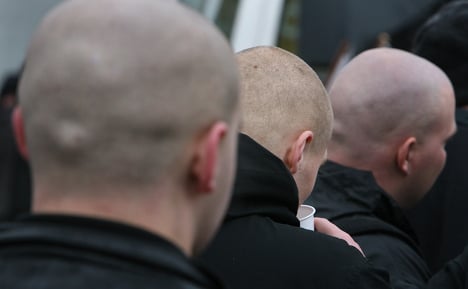 Federal police confiscated several computers and external hard-drives as well as handwritten documents from people believed to be thought to be connected to the Thaizi website – a platform used by rightwing extremists to contact each other and, most notably, share racist music.

Although the majority of the raids were conducted in Germany, one address was also raided in the UK.

Andreas Gärtner, Rostock state prosecutor told The Local, “It was an address in West Sussex in a town called Chichester. No arrests were made. We are still waiting for a report from our colleagues in the British police.”

The BKA said that 26 people between the ages of 22 and 64 are now under investigation. They are suspected of putting the lyrics of more than 2,400 songs on the website as well as 1,400 downloadable files containing songs inciting racial hatred and violence.

Holocaust denial and the promotion of a Nazi government were also common themes on the Thiazi site.

Special forces were called out alongside normal officers for the morning raids, which in Mecklenburg Western-Pomerania resulted in the arrest of a 30-year-old child care assistant known to help run the site.

In Baden-Württemberg two people were arrested, including a 30-year-old housewife and mother thought to have been helping keep the site going for a number of years. One other in Saxony-Anhalt was also arrested.

Head of the BKA Jörg Ziercke called the operation a “clear message” that rightwing extremism and spreading racial hatred would not go unpunished. “The internet is not a law-free space,” he said.