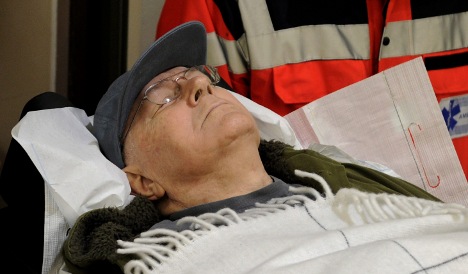 The accusation comes after decades of legal battles in which Demjanjuk and his family insisted he was a victim of mistaken identity who became a scapegoat because he shared a name with the notorious “Ivan the Terrible.”

Demjanjuk died awaiting yet another appeal after being convicted a year ago of helping to herd some 28,000 men, women and children into gas chambers in what was billed as one of Germany’s last major war crimes trials.

“Just before he died unexpectedly, he was given a high dose of a pain killer which is banned in the USA and which the German pharmaceutical manufacturer states should not to be given to patients with his bone marrow condition,” his son, John Demjanjuk Jr., said in a statement.

“We believe this led to his death and any foul play should be investigated.”

German officials have said that the elder Demjanjuk, who attended his trial in a wheelchair or bed due to ill health, appeared to have died of natural causes at the age of 91.

An autopsy gave no exact cause of death but also found no sign that anyone else was involved, a spokesman for the public prosecutor’s office in the southern town of Traunstein said several days after Demjanjuk’s March 17, 2011 death.

But a recently released toxicology report revealed that Demjanjuk’s doctors had been prescribing the painkiller Novalgin since September 2010.

A police report also showed his doctor told a nurse to administer an extra dose after Demjanjuk complained of chest pains the night he died.

The drug can have severe side effects – including sudden death – and is banned for use in patients with Demjanjuk’s medical conditions, his lawyer said.

“If you find out that a medical doctor made a very serious mistake giving overdoses of the wrong medicine and the patient is dead four hours later there could be a connection,” Ulrich Busch told AFP.

The doctors had plenty of safer painkillers to choose from and are supposed to check to make sure the drugs they prescribe are not on a “red list” for particular conditions, he said in a telephone interview.

“If the doctor knew positively that this medicine is wrong, then it is objectively a medical execution,” he added.

Demjanjuk’s son filed a complaint with Bavarian prosecutors asking for an investigation of several doctors and a nurse on suspicion of manslaughter and other charges. He could file a civil malpractice suit at a later date, Busch said.

Officials in Germany were not immediately available for comment.

Last year, a German court sentenced the Ukrainian-born man to five years in prison in connection with the six-month period he was a guard in Poland at the Sobibor death camp in 1943.

Demjanjuk vigorously denied the charges and appealed his conviction, arguing throughout the proceedings that he had been a victim of the Nazis who captured him as a prisoner of war.

He was released from jail pending an appeal, having already spent nearly two years in prison, as he was deemed unlikely to abscond.

After World War II, Demjanjuk went to live in the United States, raising three children there and working in the auto industry.

But in 1986, he was hauled before a court in Jerusalem accused of being “Ivan the Terrible,” an infamous Ukrainian guard at the Treblinka death camp.

Found guilty of all charges and sentenced to death in 1988, he was freed five years later when evidence surfaced showing Israel had got the wrong man.

Demjanjuk returned to the United States, but when new information emerged suggesting he had served as a guard at other Nazi camps, he was stripped of his citizenship in 2002 for lying about his war record on immigration forms.

Stateless, the elderly Demjanjuk was eventually deported to Germany to face trial in 2009.