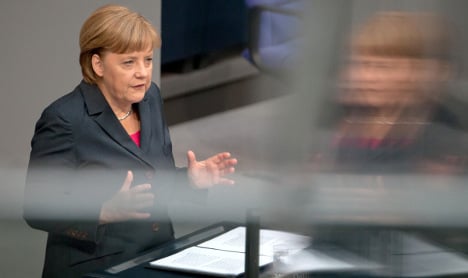 In a speech to lawmakers ahead of the meeting of G20 leaders in Los Cabos, Mexico on June 18-19, Merkel warned Europe could not take the easy way out with solutions based on “mediocrity” that failed to address core problems.

“All those looking to Germany again in these days in Los Cabos, who are expecting a drumroll and the answer… I say to them Germany is strong, Germany is an engine of economic growth and a stability anchor in Europe,” Merkel said.

“But Germany’s powers are not unlimited,” she said, cautioning against counting too much on Germany as the sole crisis fighter in Europe.

“All the (aid) packages will ring hollow if you overestimate Germany’s strength,” she said. Merkel acknowledged that Germany found itself centre stage as world leaders worry about the incalculable impact of the eurozone debt crisis on the global economy.

“The debt crisis will be the main issue at the summit,” Merkel said. “Our country will be the centre of attention – it’s a fact, all eyes are on Germany because we are the biggest European economy and a major exporter.”

But Europe would only find a way out of the crisis with a strong “political union” that mandated greater fiscal coordination and oversight to put member countries on a “solid and honest foundation”, she said.

But she said all those clamouring for Germany to “pour billions into eurobonds, stability funds, European bank deposit guarantee funds,” in a bid to calm the markets were looking for a quick fix to the crisis that was unsustainable.

And she said that many of the countries crying out for German action, notably the United States, needed to turn their backs on deficit-spending and start implementing the kinds of structural reforms Berlin has put in place.

“Financing growth with new borrowing must stop,” she said. A German government source had said on Tuesday that Berlin would not bow to pressure to boost growth with more borrowing and would “maintain that line” at the G20 summit.

“We do not need growth bought on credit, and the Americans understand that,” the senior official, speaking on condition of anonymity, said. “We will maintain that line.”

The source said responsibility for the deterioration of the global economy “rests on several shoulders” and should not be “reduced to the eurozone’s problems,” noting the role of the United States, China and some G20 emerging economies.

However Berlin has resisted calls for new European stimulus programmes to promote economic growth, saying that fiscal discipline is the only way to restore market confidence in the eurozone.