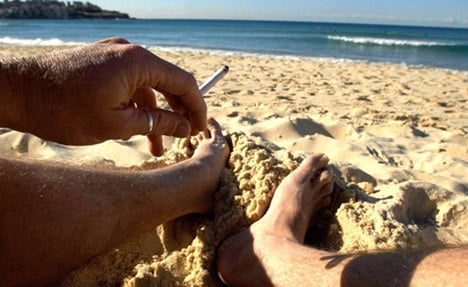 Smoke-free beaches are few and far between along Germany’s Baltic and North Sea coastline. But since last Friday, two 20-metre stretches in Mecklenburg Western-Pomerania have been reserved for those keen to have their fresh sea air just as it is.

There is one beach near the town of Warnemünde and another in the Markgrafenheide area, where over the weekend visitors to both seemed to be respecting the ban, local newspaper the Ostsee Zeitung reported on Friday.

Rostock’s Director of Tourism, Matthias Fromm, gave the idea a temporary test-run last year and found that it quickly resulted in far fewer cigarette butts left in the sand.

And although lighting-up on one of the beaches is not a finable offence, Fromm said he found it only took a sign to deter visitors from lighting up.

No other smoke-free beaches are in the pipeline for that stretch of the Baltic. But a similar ban has been working well on the popular holiday island of Rügen and on a tiny handful of North Sea beaches.