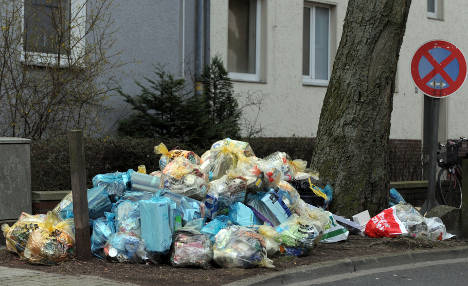 The 46-year-old driver started his shift as normal at 6 am on Monday. He drove around Wolfsburg, Lower Saxony, for more than three hours, with his colleague throwing bin bags in the back, police spokesman Sven-Marco Claus told The Local.

“He and his colleague worked from 6 am until about 9.30 am, when he parked the truck and was found slumped over the wheel,” Claus said.

“His colleague feared something was wrong and called the ambulance – when they showed up they smelled alcohol in the cab and called the police. Officers found a half-full bottle of ice tea which smelled strongly of alcohol.

“It was quite something that he was able to speak and blow into an alcohol tester – most people would be unconscious way before reaching this level of inebriation. His reading was 4.77 while the drink-drive limit in Germany is 0.49.

“I have never seen or heard of anyone being this drunk in my 27 years with the force.”

The man could face a fine of up to €1,000, will certainly lose his driving license and probably his job.

The driver’s mate told the police he had not noticed anything out of the ordinary – which might beg the question of whether the binman was normally blotto on the job.