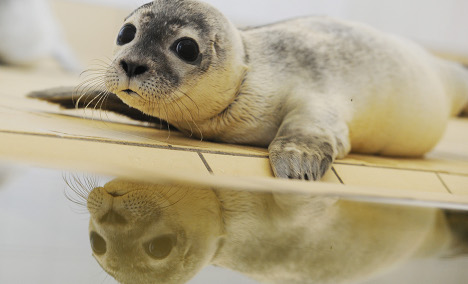 Tiny Greta was the first pup to arrive at the seal sanctuary and breeding centre in Norddeich. Lower Saxony. She was found at the end of May after seemingly having been abandoned by her mother when curious tourists came too close

Seal experts at the centre have been caring for Greta, fattening her up to a healthy weight of eight kilos. Sanctuary staff said on Friday that she was a vision of health and spends most of the day snoozing.

Click here for pictures of this year’s seal pups

A second pair of pups, Butz and Lia, were found near the town of Cuxhaven and brought straight to Norddeich. They too are being cared for and providing they are in good enough health, will be released into the wild with Greta later in the summer.

The Norddeich centre, which lies on the North Sea coast, along with another sanctuary in Friedrichskoog in Schleswig-Holstein take in between 70 and 80 Heuler every year.

Meaning “to wail” in German, the pups are called Heuler because of the crying sound they make when they’re left alone and hungry.

Both centres care for the babies all summer, feeding them up and watching them grow. In August, healthy ones are released back into the wild.