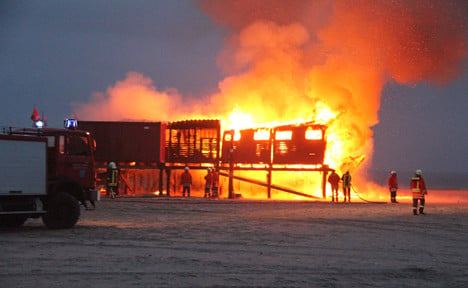 “We may as well leave the equipment there,” fire service spokesman Simon Heußen told the regional newspaper, the Westdeutsche Allgemeine Zeitung (WAZ) on Saturday.

Residents in the six-flat building are increasingly scared. Six have been injured with smoke inhalation while one family is looking to move elsewhere.

Police have no leads on what or who might have caused the fire but told the WAZ said they were treating the case as arson.

Fire fighters were called to the residential street in Bochum-Hamme, North Rhine-Westphalia on Friday afternoon to find that the flat’s rear-facing windows and a water pipe had burst due to the 1,000 degrees Celsius temperatures.

It was the seventh in that building since the middle of May.

Further north in the country, a traditional North Sea house on stilts also caught fire on Friday and was completely destroyed.

Volunteer fire fighters in the town of St. Peter-Ording were able to extinguish the blaze but the surf school that used the house as its base must now find a new location.

A fire also broke out in Berlin on Friday in a child’s bedroom, killing a five-year-old boy despite desperate efforts by his family and rescue services to save him. Police are investigating the cause of the blaze.