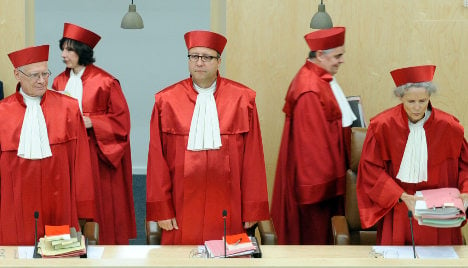 “It was the job of the political body to present a new election law within the deadline and, as far as possible, unanimously,” said Andreas Voßkuhle, president of the Constitutional Court.

But he said the parties had failed to send him a joint proposal even though they had had three years to get it organised.

The court demanded changes to the election laws back in 2008, and gave lawmakers until July 2011 to present a proposal. The government did put a new law together, and passed it last December, but it was immediately challenged by opposition parties and more than 3,000 citizens – putting it back into the hands of the crimson-clad Constitutional Court judges.

The argument is about the sharing out of parliamentary seats – and thus power – to parties according to the number of votes from citizens.

Germany has a dual system to elect members of the lower house of parliament, or Bundestag.

Half of German MPs are elected directly by their constituents’ “first votes,” while the other half of seats are shared out among the parties by proportional representation (PR) – via “second votes.”

A party’s total number of seats is relative to the number of “second,” or PR votes it gets – but the directly-elected candidates are given their seats first, and the rest are taken from a party list.

This “overhang seat” system gives parties more seats than their “fair share” – if they have won them in direct election constituencies. It is this that has caused such a problem, as it favours the larger parties.

Though the next parliamentary election is due in autumn 2013, the court will not be rushed in its examination of the new law, the Frankfurter Rundschau reported on Tuesday.

Voßkuhle said he would check it carefully, “Because a constitutionally-compliant election law is the indispensable foundation of a functioning democracy,” he said.

One critical aspect is the influence of people who do not vote, as their absence changes the balance of overhang seats. One of the challengers to the law, Thomas Oppermann of the Social Democratic Party, said it meant, for example, that the Christian Democratic Union would get an extra seat from its Berlin party list if it had 5,000 fewer votes in Saxony.

Oppermann said the law gave Chancellor Angela Merkel’s CDU an advantage which cost the other parties 1.6 million votes to balance out. This was dismissed by CDU MP Günther Krings, who said the new law would make the system fairer, the Frankfurter Rundschau said.

Krings contested that if the new law had been in force during the 2009 election, the CDU would have come out with two fewer parliamentary seats.