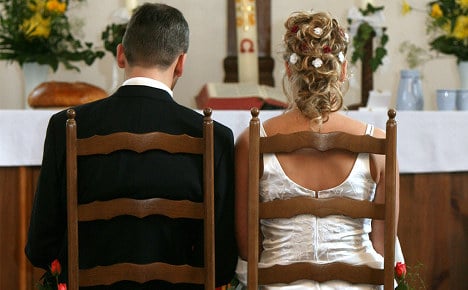 An online advert placed by “NicoleBlow37” – whose real name is Sandra – reads, “Yes, you read correctly: You may take me in front of my husband on our wedding night.”

The Bild newspaper reported on Tuesday that one lucky bidder bagged the chance to fulfil the couple’s long-time fantasy, which involves the 38-year-old woman being seduced by a stranger in a hotel – only to be caught by her groom.

“We’ll meet in a hotel which you, as a gentleman, will pay for,” the advert continued, although did not specify that the wealthy stranger role had to be fulfilled by a millionaire as in “Indecent Proposal” – nor that he had to look like Robert Redford.

“We will get to know each other and when we start getting down to business I will ring my husband and tell him to come to the room,” continued Sandra, who obviously fancied herself in Demi Moore’s role.

To confirm the legitimacy of whole shebang, Sandra, from North Rhine-Westphalia, assured bidders on the gesext.de sex auction site that she would bring the marriage certificate.

The newlyweds, who married on Saturday in North Rhine-Westphalia, were not available for comment, the paper said. Neither was their mystery wedding guest.