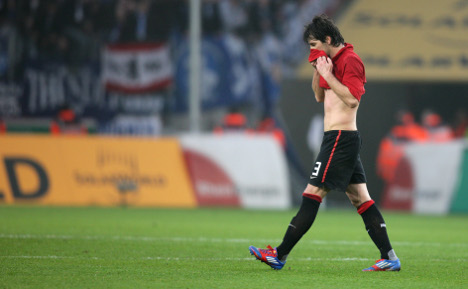 The Berlin side were relegated to the second Bundesliga division after a 2-2 draw in a chaotic second-leg match, which was stopped when Düsseldorf fans stormed the pitch, then restarted barely 20 minutes later.

After the game, a group of furious Hertha players confronted the experienced referee in his changing-room, where the incident with Kobiashvili occurred.

Kobiashvili admitted the charge before the German Football Association (DFB) tribunal, Bild newspaper reported on Monday, having previously protested his innocence. The court heard that Stark was left with a bruised neck, and was only saved from a fall of “five or six metres” by a set of bannisters.

The DFB had sought a ban of a year, but delivering the verdict, tribunal chairman Hans Lorenz explained that the punishment “took into account [Kobiashvili’s] confession, which could also have an impact on criminal or potential civil proceedings.”

The sentence is still the harshest ever handed down in the Bundesliga. Former West Germany striker Timo Konietzka was banned for six months during the 1960s for a similar offence.

Former Freiburg and Schalke star Kobiashvili holds the record for the most appearances by a foreign player in Germany’s top flight, with 336. The left-back, who has also made 100 international appearances, was described by outspoken Hertha coach Otto Rehhagel as “the fairest player since the Second World War.”

Kobiashvili will be joined on the sidelines by teammates Thomas Kraft and Andre Mijatovic, who received four- and three-game bans respectively for their part in the violence against Stark.

A judgment in the case against Christian Lell, who as well as attacking Stark is accused of spitting at Düsseldorf’s Assani Lukimya-Mulongoti, is expected later this week.

The loss of the veteran defender will be keenly felt as Hertha attempt to return to the Bundesliga at the first attempt. Last week, team manager Michael Preetz told the club’s general meeting that the Georgian would be a “pillar” of the upcoming campaign, to a chorus of boos and jeers.

The suspension is backdated from the date of the offence, meaning that Kobiashvili will become eligible to play again on December 31. The club have a right to appeal the sanction.

The club could also find itself hauled before the Court of Arbitration due to the scandalous scenes that followed the play-off. The Blau-Weissen are expected to be informed by the DFB of a decision on this score around mid-June.

Meanwhile, play-off victors Fortuna Düsseldorf will be without their captain Andreas Lambertz for the start of their Bundesliga season, after he decided not to appeal a two-game ban for holding a flare during the on-pitch celebrations that followed his side’s dramatic victory last month.