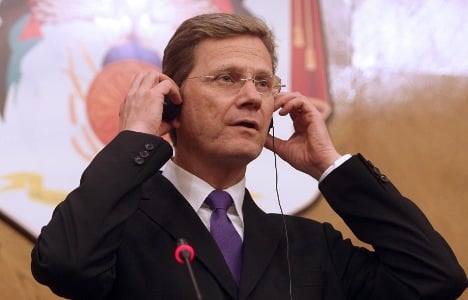 Westerwelle will leave Monday on a tour that will take in Turkey and Lebanon as well as Qatar and the United Arab Emirates, said the foreign ministry spokeswoman, without giving a detailed itinerary.

The talks are to focus on “an end to the violence in Syria,” she said.

Westerwelle is to hold his first official meeting with his new French counterpart Laurent Fabius in Berlin before his departure on Monday.

Germany has ruled out deploying troops to halt the bloodshed in Syria, an idea that has been floated by French President Francois Hollande.

“We must avoid a conflagration that could set the whole region on fire,” Westerwelle told Sunday’s Bild am Sonntag newspaper.

“Considering the highly complex and dangerous situation in Syria, we must not create the wrong expectations, pretending that we could bring about a quick solution with a military intervention.”

In Syria itself, President Bashar al-Assad on Sunday dismissed allegations that his government had a hand in the Houla massacre and accused foreign-backed forces of plotting to destroy the country.

In a more than hour-long speech to parliament, Assad said that even “monsters” were incapable of carrying out massacres such as last month’s killings near the town of Houla in central Syria.

His defiance came after Arab ministers urged the United Nations to act to stop the bloodshed in Syria, and France raised the prospect of military action against Damascus under a UN mandate.

“What happened in Houla and elsewhere are brutal massacres which even monsters would not have carried out,” Assad said of the May 25 killing of 108 people, including 49 children.