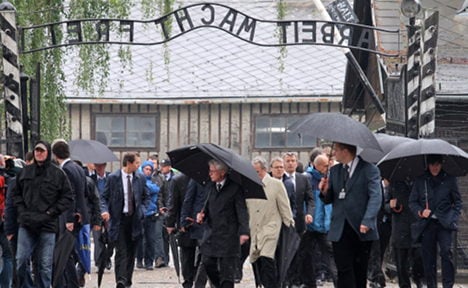 The visit came a day after Germany beat Israel 2-0 in a friendly in the German city of Leipzig and three days before the squad arrives in Poland ahead of the European championship.

“With the visit to Auschwitz, we wanted to show that a dark chapter of German history will never be forgotten and must never be repeated,” Bierhoff said in a statement.

They walked under the “Arbeit Macht Frei” gateway sign. A notorious symbol of the Nazis’ cynicism, it translates as “work makes you free”, even though few survived.

They visited the barracks, the wall where prisoners were shot and the crematorium where the victims’ bodies were burned.

The delegation then headed to Birkenau, the site three kilometres away where the Nazis gassed the bulk of the Jews they sent to the camp.

Niersbach called the Nazi era an “inhuman chapter” in German history.He underscored the “warning” of Richard von Weizsaecker, the president of Germany from 1984 to 1994, who once said: “Whoever closes his eyes to the past is blind to the present.”

On Thursday, Lahm had underlined how important it was to visit the site of Nazi atrocities, having personally visited the Dachau concentration camp near Munich in Germany.

“This is an important symbol from our side,” he said. “We need to show that we know our history and we must take ownership of our past responsibilities, even if our generation is not responsible.”

Bierhoff, meanwhile, had underlined that the planned visit was “not a PR event”.

“The subject of the Holocaust and Auschwitz has occupied us again and again and has been discussed with the players,” he said.

The squad has already attended lectures on modern German history ahead of Euro 2012 in Poland and Ukraine – the first ever edition of the tournament to be held in Eastern Europe, a region which was home to most of the Jews killed in the Holocaust.

England and Italy have also said their players will visit the Auschwitz site during the tournament, which runs from June 8 to July 1.

The Nazis set up Auschwitz in a former army base, shortly after invading Poland in 1939, initially to detain and kill Poles seen as a pool of resistance to their occupation.

They gradually expanded the site at Birkenau, turning it into a hub for the Holocaust.

Of the camp’s 1.3 million victims, 1.1 million were Jews from across Nazi-occupied Europe.

The few survivors were liberated by Soviet troops in January 1945, and the site was turned into a Polish state-funded memorial and museum.