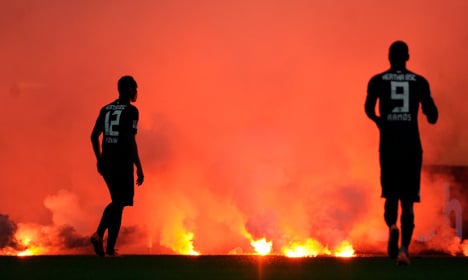 His suggestion is just one of many being considered in the country, after a particularly violent and spectacular period connected with football. Other ideas include phasing out the standing-room areas still to be found in many German football stadiums, banning alcohol and introducing personalised tickets.

But it is Interior Minister Hans-Peter Friedrich’s idea of banning known hooligans by making them wear an electronic tracking tag that has provoked the fiercest criticism. He was echoing the country’s chief public prosecutor Harald Range who called for the use of the ankle bracelets for “notorious hooligans” according to the Hannoversche Allgemeine Zeitung newspaper.

A group of football fans who are lawyers is opposing the idea, and sent a letter on Monday to Justice Minister Sabine Leutheusser-Schnarrenberger, saying the electronic ankle tags would be an illegal intrusion into people’s civil rights and against the German Constitution.

Friedrich is a member of the Christian Social Union (CSU) party and Range and the justice minister are Free Democratic Party (FDP) members. Both parties are part of the ruling coalition.

His comments came shortly before he was to meet interior ministers from Germany’s 16 states at a gathering of the State Conference of Interior Ministers.

Lorenz Caffier, chairman of the interior ministers’ conference, stopped short of calling for the tags in an interview with Sunday’s Die Welt newspaper, but said he wanted hooligans banned from stadiums and called for an alcohol prohibition and personalised tickets.

He also wants more video cameras in the stadiums and said the idea of all-seated stadiums should be considered.

Unruly fans have been a problem for some time now in German football, but hit the headlines earlier this month when fans stormed the pitch of a match between Fortuna Düsseldorf and Hertha Berlin – with more than a minute left to play.

Hundreds of fans poured onto the field, with many tearing off bits of turf and shooting firecrackers as the players fled to the safety of their locker room.

Michael Gabriel, the head of the Fan Project Coordination Centre, a pro-fan group established in 1993, told The Local that while many point to that relegation game, the trouble did not come from violent fans, but from overenthusiastic ones who broke up the game shortly before it was to finish.

Gabriel said his group acknowledges the problem of unruly fans but also does not support electronic ankle tags as a way to fix the problem.