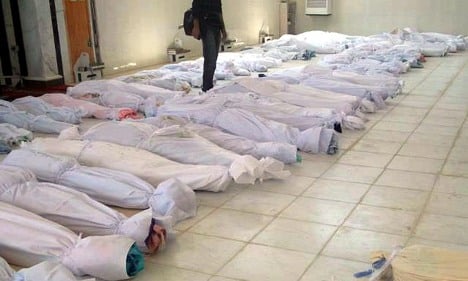 Some of the dead in Houla. Photo: DPA

“The Syrian regime is responsible for the dreadful events in Houla,” Foreign Minister Guido Westerwelle said in a statement.

He added that whoever employs heavy weapons against his own people “should reckon with serious diplomatic and political consequences.”

“We are aiming to ensure that our unmistakable message does not fall on deaf ears in Damascus,” Westerwelle said.

Westerwelle called again on Syrian President Bashar al-Assad to step down, saying the country had “no future” under him. “He must leave the way clear for a peaceful transition in Syria,” Westerwelle said.

The 52-year-old Syrian ambassador, Radwan Loutfi, was summoned to the Foreign Ministry in Berlin on Tuesday and told he had 72 hours to leave the country.

“This is the most effective way we’ve got of sending a message of revulsion to the Syrian government,” Carr said, adding that Syrian charge d’affaires Jawdat Ali and another unnamed official had 72 hours to leave the country.

World leaders have voiced outrage over the deaths of at least 108 people in the central town of Houla on Friday and Saturday, among them 49 children and 34 women.

The UN High Commissioner for Human Rights estimated on Tuesday that fewer than 20 of the 108 victims in Houla were killed by artillery and tank fire.

“Most of the rest of the victims in Taldu, one of the areas of Houla, were summarily executed in two separate incidents,” UNHCR spokesman Rupert Colville said in Geneva.

Local residents blamed the executions on a paramilitary group that “essentially supports the government forces,” he added. Eyewitnesses to the massacre reportedly saw members of “shabiha,” a pro-Assad militia, going door-to-door in Houla, killing residents with guns and knives, the Süddeutsche Zeitung reported.

The foreign ministry expelled four Syrian diplomats in February after two men were arrested on suspicion of spying on opponents of the Syrian regime in Germany.