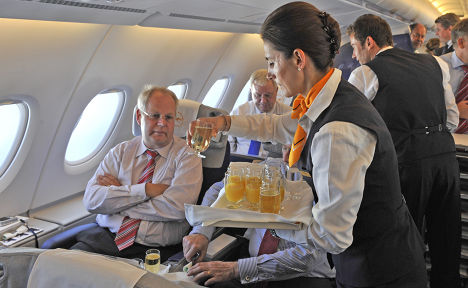 Passengers on Germany’s flagship airline have the option of donating nine euros to My-Climate, a charity that supplies parts of India with electricity produced from renewable sources.

The airline’s website offers a carbon dioxide calculator to get a clearer picture of how much greenhouse gas their flight would generate.

Flying from Berlin to Frankfurt and back would, according to the calculator, produce half a ton of carbon dioxide.

Lufthansa’s report did show that German holidaymakers were more generous, with two percent of those flying with tourist charter airline TUIfly making a donation to off-set their carbon footprint.

Meanwhile in Berlin, documents have surfaced showing that regional water authorities warned more than a decade ago that flight paths to and from the capital’s new airport could increase pollution of the lakes supplying the city with drinking water.

Berlin’s state government dismissed the warning, with urban development minister Michael Müller telling the Berliner Zeitung, “We think that there is a relatively low risk of contamination to drinking water during times of normal air traffic.

Federal Transport Minister Peter Ramsauer said the delay to the new airport’s opening – due for this Sunday, but now postponed until next March – was no reason to doubt Germany’s ability to complete big engineering projects.

“Globally the German construction industry and engineers are highly valued. More mistakes are made elsewhere. We do not need to immediately fall into the typically German navel-gazing,” he told the Bild newspaper on Sunday.