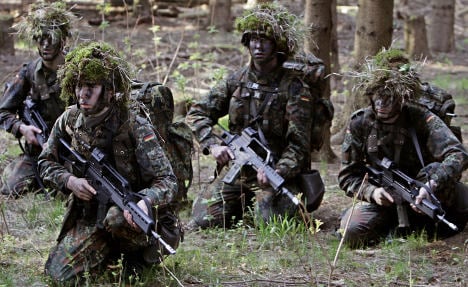 “We need the most suitable and the best candidates, regardless of where they come from,” Thomas de Maizière told the Frankfurter Allgemeine Zeitung newspaper on Sunday.

“At the same time, I also am telling the southern states that their percentage of recruits should be higher, based on percentage of the population.”

The defence minister also responded to the impression that it is easier for the Bundeswehr to find young men and women ready to sign up in eastern Germany because of higher unemployment levels there. He said this had been the case in the past but that there had been a “narrowing of the gap” in recent years.

The Bundeswehr has depended on voluntary military recruits since compulsory military service was abolished last year.

Around 45,000 young people need to apply each year to become temporary or career soldiers in order to keep numbers up, de Maizière estimates.

“That is an ambitious figure, but possible,” he says.

Meanwhile, the Mitteldeutsche Zeitung reported on Tuesday that the federal commissioner for Eastern German affairs, Christoph Bergner, of the Christian Democratic Union (CDU), and several eastern German CDU members of parliament had blocked a proposal for staff reductions in a military reform bill.

They reportedly opposed elements of the bill which were viewed as being disadvantageous to former members of the NVA, or the National People’s Army of the German Democratic Republic (GDR), in which they weren’t offered the same access to their military pensions as career Bundeswehr soldiers.

Bergner told the Mitteldeutsche Zeitung: “That is not okay. It can’t be that people with the same biographies are not treated the same. This injustice is not acceptable. That is why we intervened.”

The bill has been sent back to the defence committee of the Bundestag for review. A spokesperson for the defence ministry said the proposed law applies to about 6,200 soldiers and 3,000 civil servants. Bergner estimated the affected number of former NVA soldiers to be about 1,500.