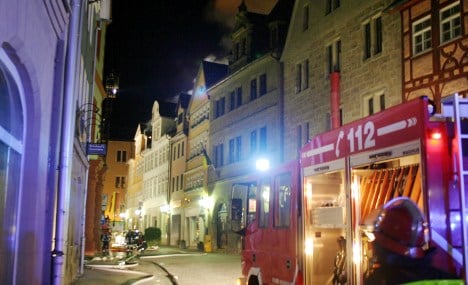 Hundreds of fire fighters and volunteers battled the flames to stop the fire spreading through the medieval town centre.

Crane-borne hoses were used to spray water down onto the roofs of the tightly-packed houses in the old area of the town, while water was also dumped onto the historic archive to try to stop it catching fire too.

Nearly 60 people were evacuated from their houses and taken to stay with friends and family away from the fire, which broke out in the early hours of Sunday. A historic doll museum was also emptied for fear it could catch fire.

The danger of fires in medieval towns is increased because the old houses are often half-timbered, and usually have nothing to stop fires spreading in roof spaces from one building to the next. The tiny, winding streets can often also make it difficult for big fire trucks to reach burning buildings.

Once the Coburg fire was largely under control, the emergency services used helicopters equipped with heat cameras to scan the buildings for hot spots which could restart the blaze.