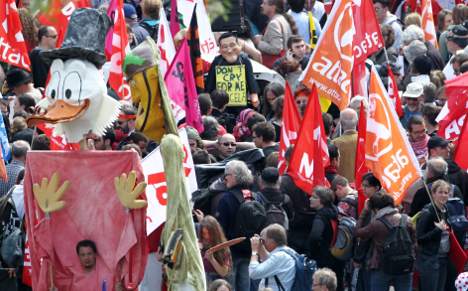 It was the only demonstration of the anti-capitalist movement “Blockupy Frankfurt” that was authorised by the city and justice authorities.

The other protests over the past four days were held despite being banned by city officials. “Blockupy Frankfurt” had called for four days of protests, from Wednesday to Saturday, to paralyse Germany’s financial capital and hinder the work of private banks and the European Central Bank (ECB).

Organisers put the turnout for Saturday’s peaceful march at more than 25,000 people, some of whom carried placards saying “The eurozone is in ruins” and “When unfairness becomes the rule, resistance becomes a duty.”

Police arrested more than 400 people in the city on Friday ahead of Saturday’s main protest.

The city has been filled with 5,000 police officers since Wednesday, who even suggested bankers going to work should not wear suits and keep a low profile.

Many banks were closed for a public holiday on Thursday, but some suggested their employees work from home on Friday. A number of central metro stations were closed and shops barricaded.

Commerzbank, one of Germany’s top banks, which occupies one of the biggest skyscrapers in Frankfurt, has said it would close until Sunday.

The ECB’s huge Eurotower building was the focus of a number of protests on Friday, while there was some disruption in the city centre too, a police spokeswoman said.

Police said most demonstrations were peaceful, atlhough some activists claimed those who had been arrested were left for hours in police buses.

The city’s mayor banned most demonstrations over public order concerns, though protesters have been given permission to march on Saturday.

On Wednesday, police cleared a group of protesters from the “Indignant” movement who had camped for seven months in front of the ECB.