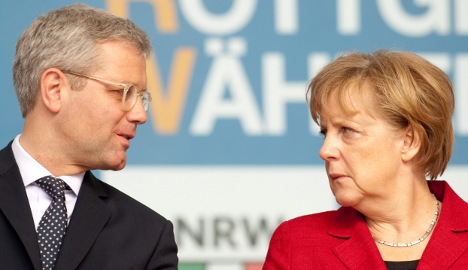 The 46-year-old, who had been seen by many as Merkel’s “crown prince” within her Christian Democratic Union (CDU), led a lack-lustre campaign in the western state, taking the party to its worst ever result there at just over 26 percent.

“I spoke with the federal president this morning and asked him… to release Norbert Röttgen from his work as minister to enable a personnel new start,” said Merkel on Wednesday afternoon.

She did not even mention North Rhine-Westphalia, or offer any other reason for his departure, but briefly praised his work as environment minister.

Although he resigned as head of the regional party on Sunday evening once the terrible results were in, Röttgen initially appeared determined to hang onto his ministerial job.

But Merkel got rid of him on Wednesday, replacing him with the chief whip of her parliamentary party, Peter Altmaier.

Röttgen’s colleagues have been gunning for him since Sunday’s election result, making scathing remarks about him behind the scenes – and even in one case in front of television cameras.

Horst Seehofer, leader of the CDU’s sister party the Christian Social Union and Bavarian state premier created waves on Tuesday when he continued talking after a television interviewer’s questions were finished. He delivered a broadside to Röttgen, describing how his initial lead in the state polls had “melted away like ice cream in the sun” – and then told the presenter to air it all, which he did.