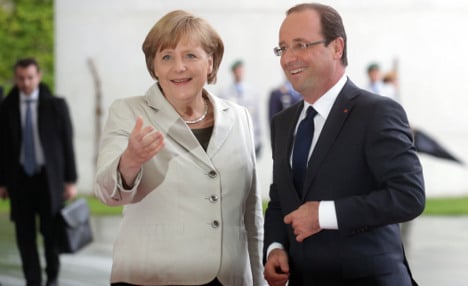 Arriving more than an hour late after a lightning strike forced his plane to turn back to Paris, Hollande was greeted with military honours before initial talks, a news conference and a working dinner.

“For safety reasons and as a precaution, the plane, which was not far from Paris turned back. It landed without problem at Villacoublay and the president took off again in a Falcon 900,” the spokesman said.

Their plans were not only overshadowed by real storm clouds, but also grim news breaking from Athens, where efforts on forming an emergency government foundered and divided parties agreed to hold new elections on June 17, threatening another month of brinkmanship at the crippled heart of the eurozone.

Meanwhile, across the Atlantic Hollande got a timely boost from US Treasury Secretary Timothy Geithner.

“We should welcome this new debate about growth in Europe,” Geithner said at a conference in Washington.

The European Commission announced earlier that growth in the eurozone stagnated, with zero growth in the first quarter, surprising analysts who had expected a fall of 0.2 percent.

In Greece, at imminent risk of being forced from the eurozone if a new government rejects tough debt rescue conditions, political leaders failed in a last-hope effort to form a government of non-political experts, as in Italy.

“We are going again towards elections, in a few days, under very bad conditions,” socialist Pasok party leader Evangelos Venizelos said after the talks.

“The Greek people must now make the right decisions for the good of the country,” said Venizelos, who supported the EU-IMF deal in a technocrat government formed last November.

A statement from the president’s office read on state TV noted simply that efforts to form a government had failed and that he would hold talks Wednesday at 1000 GMT with all political parties on setting up a caretaker administration.