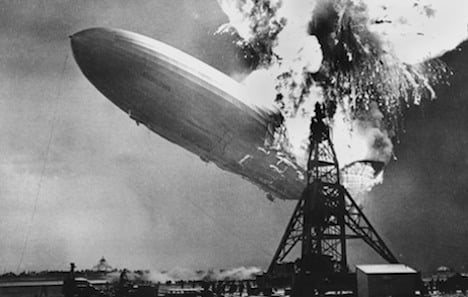 In just over 30 seconds, the largest object ever to roam the skies turned

into a plummeting fireball, crashing onto the airfield at Lakehurst, New

crashes today, yet 75 years later the demise of the German zeppelin is still

remembered as one of the 20th century’s most spectacular catastrophes.

“It was one of the first disasters to be documented as it happened,” Carl

“We all heard of the Titanic, but we only have the accounts of the people

who were rescued,” he said. “For the Hindenburg, we have newsreel footage, the

recording of radio transmissions and pictures.”

At the time, newsreels shown before feature films at cinemas brought

the horrifying images to every corner of the US and countries abroad. “It was

right there, you couldn’t miss it,” Jablonski said.

On the scene was 31-year-old radio reporter Herbert Morrison from Chicago,

whose compelling narration was broadcast nationwide a day after the Hindenburg

crash, sending chills down the spines of the audience.

out his now famous words: “Oh, the humanity.”

Even though the majority of the passengers and crew on board survived,

Morrison deplored “one of the worst catastrophes in the world.”

The zeppelins became the epitome of luxury travel, shuttling the rich and

After the Nazis rose to power in Germany, the floating giants had swastikas

emblazoned on their tail fins, turning their trips into propaganda missions.

The 800-foot-long Hindenburg, which went into service in 1936, was the

the earth and the oceans below, a lavish dining room, a specially designed

lightweight piano – and even a smokers’ lounge. The voyage across the

Atlantic took about two and a half days, much faster than a steamboat at the

On May 3, 1937, the Hindenburg left Frankfurt for its first transatlantic

flight of the season. When the airship reached the US East Coast three days

later, it ran into bad weather.

Thunderstorms over Lakehurst delayed the landing for several hours. As the

Hindenburg finally attempted to dock with the mooring mast, it suddenly burst

“The actual cause is not really known,” said Jablonski. American and German

fire to highly-flammable hydrogen which was escaping through a small gas leak,

ultimately blowing up the entire airship.

Other theories blame the flammable outer skin of the Hindenburg in

combination with a static spark, an engine failure or even lightning as

causes for the disaster.

The uncertainty surrounding the catastrophe has also nourished conspiracy

theories, with some believing in sabotage committed by an opponent of the

Nazis travelling aboard the Hindenburg.

Jablobski rejects such speculations. “Sabotage was ruled out by the

investigation,” he said. “We stick to the mainstream explanation.”

age of airship travel, shattering the public’s confidence in the zeppelins

The remaining airships of the German fleet were sent for salvage. The