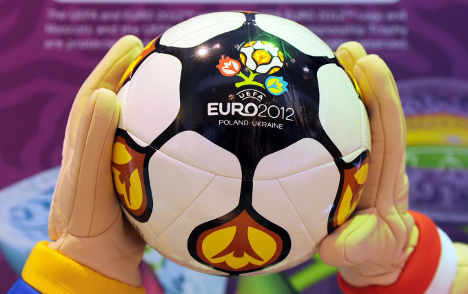 Far more (74 percent) would like to see Chancellor Angela Merkel and her cabinet stay home during the tournament, a new survey by state broadcaster ARD said, while a little over half (53 percent) want to see political and economic sanctions instead of a boycott.

On Thursday the European Commission announced that it would be boycotting the competition, in protest against the Ukrainian government of President Viktor Yanukovych. Commission President Jose Manuel Barroso announcing he had “no intention” of attending any matches.

A Ukrainian daily close to the party of President Viktor Yanukovych published a startling editorial on Friday accusing Germany of effectively still being Nazi-run.

The unashamedly anti-German article in the national daily Segodnya — owned

by tycoon and close Yanukovych ally Rinat Akhmetov said, “Germany again wants to dictate its will over Europe.”

“They have taken off their masks and it really is the case that the Berlin of 2012 is in no way different from the Berlin of the 1940s.

“Germany has not changed in the past 70 years and we are not just talking about the geopolitical ambitions of Merkel and Westerwelle.”

There has also been international backlash against the planned boycott, with human rights organisation Amnesty International questioning its efficacy.

Wolfgang Grenz, general secretary of Amnesty’s German branch, told the Handelsblatt newspaper that politicians and sports officials should rather “use the opportunity to draw attention to the serious violations of human rights and to call for better human rights protection from the Ukrainian government.”

And a senior ally of President Yanukovych warned Germany of economic consequences of its boycott in an interview on Friday.

It follows comments on Thursday by German Foreign Minister Guido Westerwelle, who has taken a tough stance towards Ukraine over its treatment of Tymoshenko.

He said that EU countries had agreed to delay ratification of an association deal with Ukraine because of concerns over the 2004 Orange Revolution leader, who has been on a hunger strike since April 20 to protest her alleged beating by three prison wardens.

“Without agreement, German access to the Ukrainian market will be limited,” Kozhara warned. “It seems to me that the Tymoshenko case has a very personal character for some politicians in the West.”