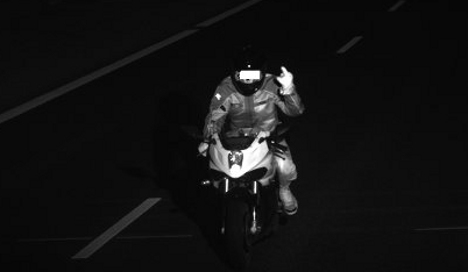 The 17-year-old habitually drove at more than 100 kph through the southern German city’s Richard Strauss Tunnel – often sticking his middle finger up towards the speed camera.

His speed was so excessive that each race through the tunnel would earn him a month’s ban from the road – if only the police could catch him.

But his souped-up bike had no number plate, leaving the police unable to trace him.

The cops finally snapped after the rude teenager was blitzed for the 26th time since mid-March.

So on Sunday they set up a trap at the end of tunnel, and the biker, identified as a student by Bild newspaper, raced straight into it.

The brazen biker confessed to his misdemeanours, the Süddeutsche Zeitung newspaper reported on Wednesday, but that couldn’t save him from a hefty fine.

The teenager, who did not even have the right driving license for the bike, was hit with a fine of €160 euros, three penalty points and a month’s driving ban – for each of his 26 recorded offences.

The tuning work on his 125cc vehicle was also found to be illegal, so the bike was confiscated and sent for an expert technical assessment.