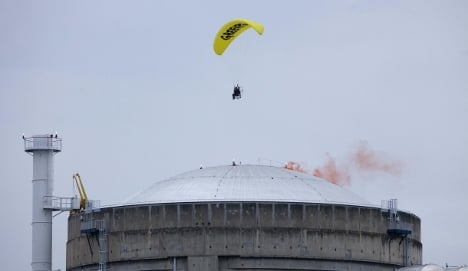 Greenpeace confirmed to The Local that the man who generated headlines around the world with the strike, was a German activist.

And he said the problem of vulnerability at the Bugey nuclear power station was just as valid in Germany as in France.

“The scenario made clear in the 9/11 attacks, of nuclear power stations potentially being attacked with hijacked planes, has not been addressed in France or in Germany. The only way to be sure they are safe is to shut them down.”

He said the French group had chosen the stunt now because of the presidential election currently underway in France. Socialist candidate Francois Hollande has said he would like to reduce France’s dependence on nuclear power, said Breuer.

German nuclear power stations are set to be closed down by 2022, in a decision made after the Japanese disaster at Fukushima last year.