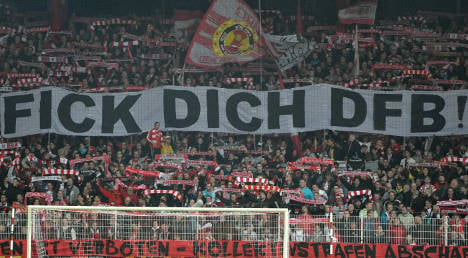 Even as international football connoisseurs begin to pay increasing attention to German football and Bundesliga matches are televised all over the world – the recent battle royale between Bayern Munich and Borussia Dortmund was reportedly aired in over 200 countries – the German Football Association (DFB) is struggling to hold back a new tide of football hooliganism.

Two weeks ago, a Leverkusen player had his nose broken after being recognised by hostile fans in Cologne, while in March, 14 Dynamo Dresden fans were arrested after defying a stadium ban and getting into a brawl at Eintracht Frankfurt stadium.

Earlier in the month, a gang of Cologne fans coordinated a bizarre and terrifying attack on a bus full of Mönchengladbach fans as they were driving along the autobahn. Several cars and vans reportedly forced the bus into a service station, where around 40 men smashed its windows with baseball bats and iron bars. Luckily no-one was hurt inside the bus, which contained several children.

So what can the DFB and the police do to counter the violence? And are they doing anything wrong? Jacob Sweetman, editor of Berlin’s English-language football magazine No Dice, thinks that the authorities could learn a lesson from England.

What’s the first thing that strikes an English football fan coming to a German game?

In Germany, the young working class men still make up the majority of football fans travelling to games. They get pissed up, they shout and sing a lot and they fight a bit at times. That’s the primary difference between Germany and England. That’s also why a lot of English fans are coming over to watch German football. It’s seen as being “real” football – you’ve got terracing, you’re allowed to drink in the stadiums, it’s loud and it’s affordable.

But weirdly, German football fans still see England as the home of football culture. And German troublemakers even look up to England as the home of hooligan culture. You see Union Jack tattoos all the time. It’s all about branding. The German “Hoolywood” label is modelled on the English “Lonsdale,” which in England is associated with the far-right.

Which German clubs’ fans have the worst reputation, and are they associated with neo-Nazis?

You’ve got Dynamo Dresden, Eintracht Frankfurt, Hansa Rostock. But it’s hard to say if they’re really political. You’ve got some nasty bastards in there, but it’s more just tribal fighting, as far as I can see. Obviously, St. Pauli fans are much more left-wing than Rostock fans, so there’s natural flashpoints between them, but I wouldn’t say it’s politically driven.

A few weeks ago, fans of FC Union Berlin held up a banner that read “Fuck the DFB,” at their game against Frankfurt, and helped the away fans defy a stadium ban by letting them in. Obviously there’s a lot of hostility towards the DFB, but what should it do about violence?

What can they do? They can either penalize the clubs with cash fines, but a lot of the time that is undermined by hardcore fans, ultras, who go round the stadium collecting money to pay them. The DFB needs to come up with a creative solution, because at the moment they’re succeeding only in uniting the fans against them. The biggest problem is the DFB’s intransigence. The fans don’t believe the DFB has their interests at heart at all. That’s why it gets called the Fussball Mafia – because they seem to see the Bundesliga as a beautiful little cash cow.

To a certain extent the problem was solved in England by pricing fans out of games, and that is now happening in Germany too, but that’s not necessarily a constructive solution. I think stadium bans have been proven not to work. You’ll still get people travelling anyway, and you’ll still have trouble.

What role do you think the police plays?

One thing that doesn’t help is the policing. In England they learned through the hard times how to police football fans. Here, the police still rule by intimidation and numbers, which is completely different to how football games are managed in England.

There, they learned through years of shit that observation from afar is much more effective than having an intimidating line of tooled-up, ready-for-action policemen at the stadium. They know in advance who the troublemakers are, they have spotters. They can control things a lot easier.

Here in Germany, you walk past them, eyeing you up wielding their truncheons. That’s intimidating, and it winds people up and it doesn’t help! If you treat people like animals they’re going to behave like animals.

That’s not to say football hooliganism has stopped in England, or that German violence is as bad as it was in the old days in England. I go to about three matches in Berlin every week, and I’ve never seen any serious trouble.