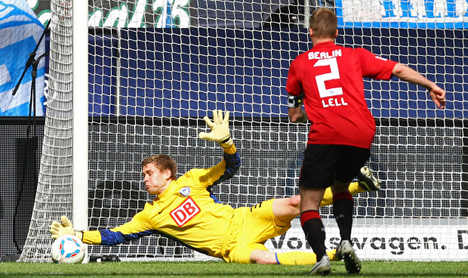 Berlin scored no goals to Schalke’s four and Cologne lost to Freiburg in a 4-1 match, meaning Berlin and Cologne are fighting over 16th place.

This means there will be an end-of-season play-off to stay in Germany’s top flight against the team which finishes third in the second league.

Meanwhile German champions Borussia Dortmund closed in on another record on Saturday as their 5-2 win over relegated Kaiserslautern took their unbeaten run to 27 league games.

Having broken the Bundesliga record for the longest unbeaten run in a season, Dortmund are now just one behind Bayern Munich’s record of 79 points collected in a single Bundesliga season, which they managed twice in the 1970s.

In the Hertha-Schalke game, Dutch striker Klaas-Jan Huntelaar scored twice in Schalke’s 4-0 win over Hertha to make him the league’s top scorer with 27 goals in 32 games.

The win means Schalke will finish third and claim the league’s final direct qualification place for the Champions League.

Dortmund, having been confirmed league champions for the second season last weekend, picked up their fifth straight win with Paraguay striker Lucas Barrios hitting a hat-trick.

Dortmund got off to an inauspicious start at Kaiserslautern as Brazilian defender Felipe Santana scored an own goal after only 16 minutes to put the hosts ahead.

But the champions roared back just two minutes later as Barrios scored two goals in eight minutes to put the guests into a 2-1 lead.

Germany’s teenage star Mario Götze netted his first league goal in five months, following a groin problem, on 33 minutes to make it 3-1 at the break.

Although Kaiserslautern pulled another goal back just after the break, it was one-way traffic from then on as Barrios completed his hat-trick on 55 minutes before Croatia midfielder Ivan Perisic scored Dortmund’s fifth on 78.

Fresh from their penalty shoot-out victory heroics at Real Madrid on Wednesday to reach the Champions League final against Chelsea, Bayern enjoyed a 2-0 win at home to Stuttgart.

Germany stars Mario Gomez and Thomas Müller scored for the Bavarians at Munich’s Allianz Arena, their last game at home before the Champions League

Mönchengladbach’s goalless draw at Augsburg confirms their fourth-placed finish which means they have to win a play-off to qualify for next season’s Champions League.

Bayer Leverkusen’s ex-Germany striker Stefan Kiessling hit the winner in their 1-0 win over Hanover 96 which means they finish fifth and gives them a Europa League place for next season.

Wolfsburg, who enjoyed a 3-1 win over Werder Bremen with ex-Germany striker

Patrick Helmes scoring twice, are vying with Hanover for seventh spot and the