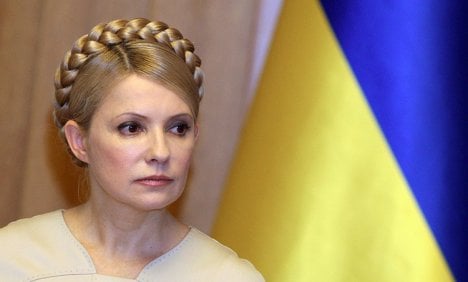 His spokesman said that the move “can be seen in connection with the imprisonment of Ms Tymoshenko.” He said Gauck had consulted with Chancellor Angela Merkel before taking his decision and that the Ukrainian ambassador in Berlin had been informed.

Tymoshenko, who was briefly Ukraine’s prime minister but was sentenced in October to seven years behind bars for abusing power, has gone on hunger strike after allegedly being beaten and taken to a state hospital against her will.

She has fought incessantly with her wardens since first being put under arrest in August and has previously refused to let any Ukrainian doctors touch her as a form of protest.

Ukraine asked Germany on Wednesday to send a team of doctors to treat her, but a decision has not been made. The government said a previous offer of treating Tymoshenko in a German hospital – which was flatly rejected by Ukraine – was still open.

Deputy Prime Minister of Ukraine Valery Khoroshkovsky, said that his government could potentially allow Tymoshenko to be treated in another country if Brussels closes outstanding talks on a political and trade deal.

For now, a Ukrainian foreign ministry spokesman said Kiev had sent an “official request to Germany for its government to assist in the arrival of German doctors from the Charité clinic to examine and treat Yulia Tymoshenko.”

“We are checking if the pre-conditions in the Ukrainian proposal make sense in the context of Tymoshenko’s medical treatment,” he said.

The decision marked the latest chapter in a saga that has pitted Tymoshenko against President Viktor Yanukovych for the past two years while unravelling Ukraine’s relations with Europe and edging it closer into Russia’s fold.

The chief local prosecutor conceded Tymoshenko had resisted being taken to hospital – where she fears being poisoned following a similar attack on former ally and president Viktor Yushchenko in 2004 – and was taken there by force.

“They took her in their arms, carried her to the vehicle and took her to hospital,” prosecutor Hennadiy Tyurin said on Tuesday.

The 51-year-old said she “was hit hard with a fist in the stomach” and at one stage “thought the last minutes of my life had come,” in a hand-written letter posted by her party.

And a report from the Ukrainian parliament’s human rights commissioner said a personal inspection Tuesday showed “a sizable bruise on the lower right side of the abdomen” and other obvious signs of violence on Tymoshenko’s body.

Ukrainian prosecutors immediately denied the allegations and accused Tymoshenko of staging a political provocation designed to further damage the current leadership’s relations with the European Union.

Tymoshenko’s claims sparked a chorus of concern from the European Union and Washington, while also drawing calls from Moscow for the authorities to show “humanity” in the case.