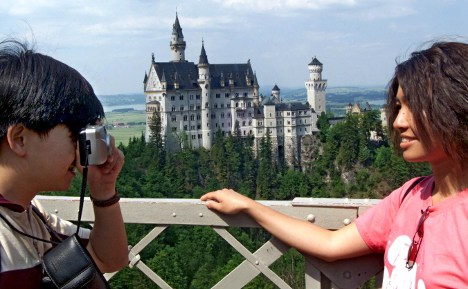 In second place on the list published on Friday came Ludwig II’s faux-medieval Neuschwanstein castle in Bavaria, which draws more than a million visitors a year with its fairy-tale turrets and spires.

The Baroque Hohenzollen Sanssouci castle in Potsdam and the Schwetzingen castle in Baden-Wüttemberg – famed for its beautiful gardens and lake – came eighth and ninth on the list.

Cologne’s impressive gothic cathedral, which receives a staggering average of 20,000 visitors a day, came in at third place.

Brandenburger Tor and Musuem Island both made the top ten, suggesting Berlin’s tourism boom is far from over. Hamburg’s fish market and harbour also made it to the top of the tourists’ hit list.

Foreign visitors make a bee-line for UNESCO world heritage sites, according to the study, with 22 of 36 German sites in the top 100 German destinations.

The number of overnight stays in Germany by tourists from abroad rose by six percent in 2011 to 63.8 million, rising twice as fast as the number of stays by domestic visitors.