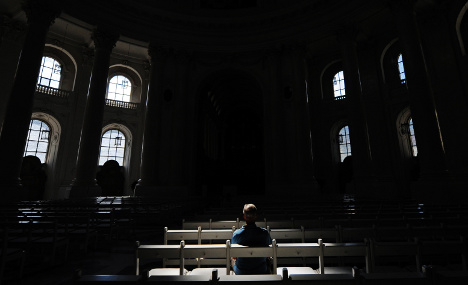 A study by social scientists at the University of Chicago showed that the legacy of the state atheism of the formerly Soviet-controlled East was still keenly felt, with 52 percent saying they did not believe in God.

Just eight percent of East Germans surveyed said they believed in a God “personally concerned with every human being.”

The study used data from 1991, 1998 and 2008 in 30 different countries, Die Welt newspaper said this week. In West Germany just 10 percent of those asked said they did not believe in God.

Neighbouring Poland is far more religious than either part of Germany, with almost 60 percent saying they believed in God.

Author of the study Tom Smith said, “Countries with high atheism (and low strong belief) tend to be ex-socialist states and countries in northwest Europe.”

But he said Poland was an exception due to the strong influence of the Catholic Church. He described the former East Germany as “anchoring the secular pole internationally”.

The report indicated that faith was far stronger in former West Germany, where 54 percent of people surveyed said they believed in God and always had – a much higher proportion than in other developed Western European nations like Sweden, France and Great Britain.

But Die Welt said, churches are far from packed even in western, relatively pious parts of the country. It said in many areas churches were being forced to close due to dwindling congregations.

In the large Gelsenkirchen-Wattenscheid parish, the number of churches has dropped from 39 in 1990 to 29 today, and parish superintendent Rüdiger Höcker predicts the number will dwindle even further.

“We are well on the way to becoming a minority,” he told the paper.

“It’s a fate that Protestants in most regions of the country will not be spared. These days, we’re burying far more parishioners than we’re baptising children,” he lamented, highlighting the knock-on effect on church revenues and maintenance costs.

In Bavaria, Catholics are seriously disquieted by proposals to drastically reduce the number of parishes and dispense with small Liturgy of the Word services on Sundays, to be replaced with much larger centralised Eucharist gatherings.

The Church argues its hand has been forced by a lack of priests, but many parish communities have demonstrated against the move, with congregants linking hands to encircle their local church in defiance.

The fear that unites both denominations is of an inexorable decline in believers, and the validity of this concern is borne out by the statistics of the study.

In former West Germany, 36 percent of over-68-year-olds said they believed in God, compared with 18 percent of people younger than 28.

In the former East, the figure was 12 percent for those over 68, while not a single under-28-year-old surveyed said they believed in God.