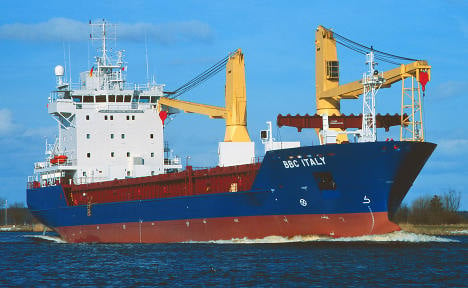 The German-owned ship had been chartered by a Ukrainian company and was sailing from Antigua when it dropped off the radar several times over the weekend. It currently has the name “Atlantic Cruiser” but has previously sailed under the name “BBC Italy”.

Defectors from Syrian dictator Bashar Assad’s regime tipped-off the company which owns the boat – Emden-based Bockstiegel – that a shipment of weapons was due from the north eastern African country of Djibouti.

Authorities succeeded in tracking down the 6,200-tonne ship and are holding it in an unnamed Mediterranean port in order to search it for weapons, the Berliner Zeitung newspaper reported on Monday.

The EU has imposed a weapons embargo on Syria and Germany is now “using all possible means to ensure that the arms embargo with Syria is not violated,” a spokeswoman for the Economy Ministry said on Monday.

The freighter was dropping in and out of shipping radars over the weekend. At one point, it seemed to be heading to the Turkish port of Iskenderun before disappearing. Later, it was found again between Turkey and Syria. A report in Der Spiegel magazine suggested weapons on board had come from Iran.

But Bockstiegel said: “According to the description of the goods in our documents as well as their appearance, the firm has no indication that they are weapons, ammunition or heavy military equipment, as stated in the press.”

“The firm is in constant contact with the company that chartered the ship, which for its part stresses that the shipment for Syria did not contain weapons or military equipment, but exclusively legal goods for civilian use,” it added.

The containers currently on the Atlantic Cruiser were loaded in the Indian port of Mumbai, Bockstiegel said. According to the shipping firm’s documents, the equipment bound for Syria consisted of parts for a thermal power station.

Nevertheless, the firm acknowledged that “the crew only has access to the container stacked at the top”. This was being inspected and appeared to consist of wires and cables, the statement said.

The firm has ordered the ship not to continue its journey until the facts are established and has agreed with the German government that the vessel would not dock in Syria until the cargo could be checked at a safe third-country port.

Holding the ship may prove problematic, as it is not thought to be “involved in piracy, the slave trade or illegal radio broadcasting and therefore by law cannot be stopped and searched,” international law expert Wolff Heintschel von Heinegg told the Berliner Zeitung.

Just because a German company owns the boat, does not mean that the country has the right to go aboard and search it, von Heinegg said. He added that as also 90 percent of Germany’s exports and imports are transported by ship, stop and searching could be damaging to trade relations.