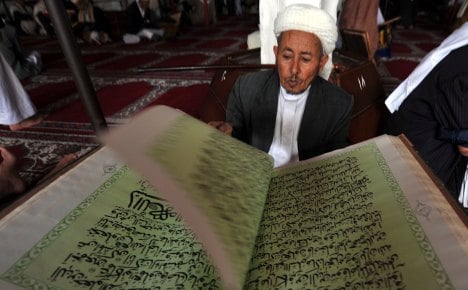 “Although there is in principle nothing against the distribution of religious texts,” he said, Die Welt reported he added that the radical Salafists were disturbing the religious peace with their aggressive methods.

His aim is to give away 25 million free German-language copies of the Koran to non-Muslims – his campaign is called “Read! In the name of your Lord who created you.” Additional copies are also being distributed in Austria and Switzerland.

The Cologne-based preacher says the aim is to try to save people from eternal hell.

The project is being funded by Muslims who buy one Koran, which then funds the production of a second one to be given away and also by donations from wealthy people in Bahrain.

Die Welt said the first copies have already been given out – and that Abu Nagie claims to have given away more than 300,000 German-language Korans across the country already. People are also invited to order a free copy to be delivered by post.

The Easter weekend was the spark for a new phase, the paper said, with what it termed a “frontal offensive against the non- and other-believers”. Others might describe it as setting up stands in 35 town centres across the country and handing out free copies of the Koran.

The paper does admit that the version of the Koran is a moderate one – a translation by Mohammed Ibn Ahmad Rassoul with comments from the German convert Frank von Bubenheim and has been rated by intelligence agencies as not problematic.

Yet the Berlin state office for the protection of the constitution said, “Salafistism is strongly radicalising and is promoted by its followers as supposedly the only true Islam.”