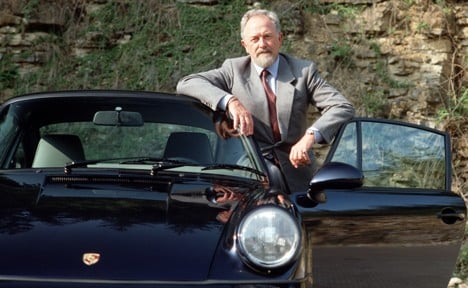 The grandson of the luxury automaker’s founder, F.A. Porsche, as he was known, dreamed up in 1963 the sleek lines and alluring curves of the 911 that have sent car fans’ hearts a-flutter for half a century.

“As creator of the Porsche 911, he established a design culture in our company that still leaves its mark on our sports cars,” the head of Porsche’s supervisory board, Matthias Mueller, said in a statement.

The 911 model is now in its seventh generation.

“A design of the century for which Porsche is envied around the world,” the mass-market Bild newspaper said of the 911 in an obituary for Porsche. “True fans of the brand only permit slight changes to the design to this day.”

He also created the Formula One racecar 804 as well as the Porsche 904 Carrera GTS and in the 1970s branched out into Porsche merchandise including lines of wristwatches and sunglasses.

“Design must be functional and this functionality must be applied visually with an aesthetic that is without gags that have to be explained first,” the company quoted him as saying. “Good design should be honest.”

Porsche, who began at the company in 1958 and was still the honorary chairman of the company’s supervisory board when he died, is survived by his wife and three sons.

The cause of death was not announced.