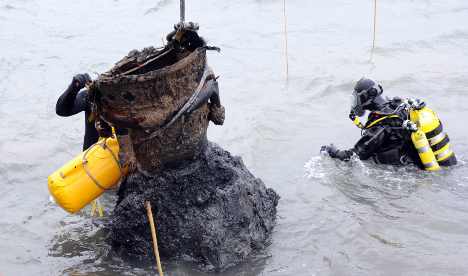 The four-foot missile section was found nose-down sticking out of the mud at low tide in Harwich harbour on the east coast of England last week, a Royal Navy spokesman said.

A Royal Navy diving team and bomb disposal experts have been working at the site near Felixstowe since last Wednesday, fearing the rocket could have been intact. They had been waiting for the right conditions to remove it.

Royal Navy divers dug out the casing on Saturday evening and found the warhead section was missing, along with the original 2,000 lbs of explosive.

The find is very unusual as remnants of V2 rockets were usually destroyed when the missile came down at three times the speed of sound.

The Nazis mostly fired them at London and Antwerp in Belgium from 1944 onwards, though Ipswich, close to where the remnants were found, was also targeted.

The liquid-propellant V2 rocket was developed at the beginning of World War II in Germany.

It was the world’s first long-range combat ballistic missile and the first object to be fired into space. The missile took just four seconds to reach its target at speeds of up to 3,500 mph.

Half of the Rhineland city of Koblenz was evacuated last November when a huge British World War II bomb was discovered in the river there. It was successfully defused.