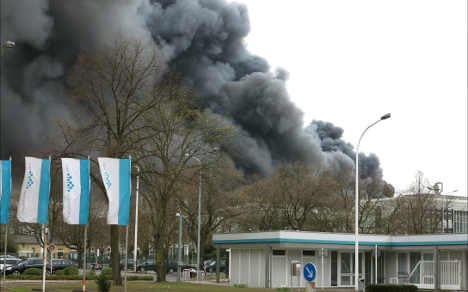 Flames were said to have reached up to 100 metres into the sky above the Marl chemical park, one of the largest in Germany, just a few kilometres north of Dortmund and Essen in North Rhine-Westphalia.

A spokesman for the industrial park confirmed on Saturday evening that one person had been killed and another injured in the explosion.

Although two people could not initially be accounted for, they were later discovered to be at their homes.

The explosion happened shortly after 2pm in a Evonic Degussa facility for producing CDT – a chemical used in manufacturing plastics that is insoluble in water.

“A column of smoke rose 100 metres (320 feet) high in the wake of the explosion, but initial checks by environmental authorities don’t indicate there’s any danger to health,” a police spokesman said.

Five fire trucks and around 100 fire fighters and a police helicopter were sent to tackle the blaze.

The industrial park spokesman said that the black smoke rising from the burning building was not poisonous, but advised people living nearby to keep doors and windows shut.

Videos and photos of the fire were soon circulating online showing what one witness described on the local newspaper Marl Zeitung website as a “scary black cloud.”

The chemical make-up of the smoke cloud, which police say is now heading south, is as yet unknown.