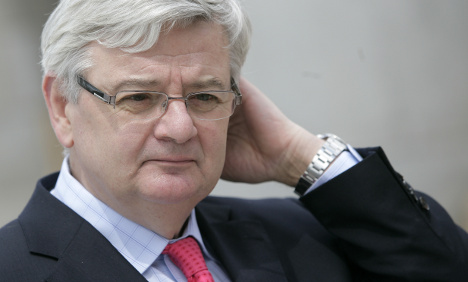 Fischer, an unorthodox Green politician, was caught up in a scandal in 2001 when photographs were given to a German magazine showing him attacking a policeman during a 1973 demonstration.

He took on the mantle of elder statesman after serving as foreign minister and vice chancellor under Social Democrat Chancellor Gerhard Schröder, and now makes infrequent public appearances.

Yet he was due to speak at the Winterthur theatre near Zürich on Saturday on a number of global matters.

But after local anti-capitalists objected, calling for him to be driven away, and urging people to “come in numbers and be creative, with shoes and cake,” he backed out.

They called him a warmonger, referring to his support for the Nato bombing of Serbs over Kosovo in 1999, and also criticised him for taking jobs with energy and oil companies since leaving political office.

“Talking about sustainability and a better world under a large police protection operation was such a big contradiction for Joschka Fischer that he did not want to accept it,” a statement from the theatre said, announcing the speech was cancelled.