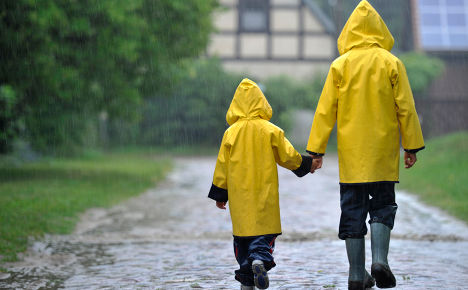 “This is a relief, as the risk of forest fires has been high recently,” meteorologist Dorothea Paetzhold told The Local. “But the drop in temperatures will be rather noticeable.”

The country has been enjoying sunshine and dry weather thanks to a high pressure system. But as this system moves across towards the Atlantic, cold Scandinavian air will move in, tightening its grip by Wednesday and stretching over the weekend.

On Tuesday night, temperatures will begin to drop, with thermometers dipping back down to freezing once more. There will be highs of seven degrees Celsius in the western states.

During the day on Tuesday, those who are not stuck in the office should enjoy the remaining warm rays, as the skies is expected to be scattered with the first clouds of a rainy weekend and the whole country is forecast to stay dry.

Along the coast, it will be considerably cooler, with a fresh wind. The south west of the country will be the warmest.

Skies will stay slightly cloudy through the night on Tuesday and temperatures will drop once more with lows of between zero and one degrees Celsius.

Wednesday will hail the start of a brief cold snap, but not for the upper Rhine area where it will reach a warm 22 degrees. But at Germany’s northern coast it will barely hit 12 degrees. Wind will also begin to pick up come Wednesday, with chilly gusts whipping across coastal areas and parts of northern Germany.

“After Wednesday, we can only expect temperatures to reach as high as 13 degrees Celsuis,” said Paetzhold. “It will generally stay between seven and 11 degrees.”

On Wednesday night, thick clouds will gather over northern Germany, bringing rain. The south will remain clear but there may be chance of a light frost in the far south, and even snow around the Alps.

As the sun rises on Thursday, thick clouds may stick around, bringing patches of rain from north to south. Temperatures will struggle to get over 10 degrees in the north, and 13 degrees in the south and there will be a brisk wind coming from the northwest.

“This rainy, cooler weather will most probably last over the weekend,” said Paetzhold. “But the Easter weekend will hopefully look different.”