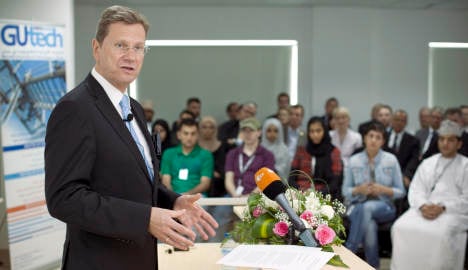 Westerwelle said ahead of talks with Oman’s Sultan Qaboos that he was confident the sanctions intended to put pressure on Iran were starting to work but that smuggling, which is rampant in Oman, was undermining them.

“This sanctions policy is that much more effective when more countries worldwide take part, and that is why we are trying to convince our interlocutors to participate,” he told reporters.

Westerwelle said this meant not only imposing sanctions “but also stopping

“This applies not only to one country or border, rather, as we know, to very many,” he said.

The smuggling trade to Iran from Oman is thriving, delivering many of the goods prohibited by international sanctions in unmarked speedboats across the Strait of Hormuz linking the oil-rich Gulf with the Arabian Sea.

An Omani customs agent at Khasab’s port told AFP this month that some 500 boats make the journey across the Strait daily, a practice he noted is legal in the Gulf state but illegal once the goods enter Iranian waters.

Westerwelle said the discussion about possible military action against Iran, now being debated openly in Israel, was “counterproductive” and called the situation “very serious.”

“That is why I think every effort is needed to avert an escalation,” he said.

He said Germany was working toward a political resolution of the conflict and urged regional partners such as Oman, which he has visited twice in one year, to use their influence.

Westerwelle said European partners were pursuing a two-pronged strategy comprised of biting sanctions and the likely resumption of talks next month.

“(The new round of talks) is based on our European initiative and we hope that it can lead to substantial talks in April,” he said.

The EU’s foreign policy chief Catherine Ashton is to head the talks with Iran on behalf of six world powers — Britain, China, France, Germany, Russia and the United States — but a time and venue still need to be agreed.

After several failed rounds, the last in Istanbul just over a year ago, the powers agreed last month to resume the talks after receiving a written commitment by Iran to address the nuclear issue at the negotiations.