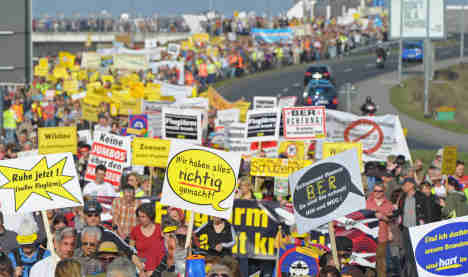 With just months to go before the new Berlin Brandenburg Airport opens its doors in June, the demonstration against aviation noise in the German capital was the biggest of its kind so far.

Citizen groups in Berlin have spent months contesting flight route plans at the future BBI airport. The initiatives have called for a strict ban on flights between 10 p.m. and 6 a.m.

“We continue to call for a night flight ban from 22:00 until 6:00 and a cap on the number of take-offs and landings each day,” said Michael Wilk of the “Rhein-Main” citizen initiative coalition.

In Munich, the demonstration took aim at domestic air travel. “We cannot keep expanding air traffic inside Germany when we have such well-developed road and rail networks,” said Florian Sperk of the “Bund Naturschutz” group in Bavaria.