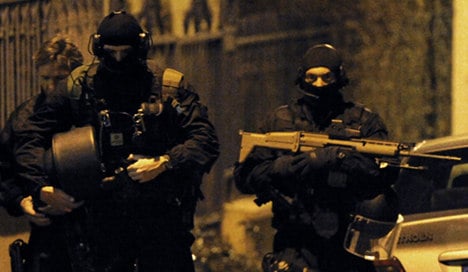 Mohammed Merah, a French citizen of Algerian descent, proclaimed allegiance to al Qaida during a siege in Toulouse after he admitted having killed four people at a nearby Jewish school. Police also believe Merah murdered three French soldiers.

He died in a hail of bullets as French police stormed the apartment where he had been holed up for 31 hours in the southwest French city.

Such attacks could take place in Germany, said Rainer Wendt, chairman of the DPolG police union.

He told the business daily Handelsblatt that 250 of “roughly 1,000 sympathisers of Jihad-terrorism in Germany” had received attended terrorist training camps on the Pakistan-Afghanistan border.

But it is impossible for security agencies to keep a round-the-clock observation of these 250 people. “In this respect it is of course possible at any time that also in Germany a radicalized single perpetrator commits such actions like in Toulouse,” said Wendt.

He called for politicians to make training in so-called “terror camps” a crime in Germany.

“Politicians would be well advised to think about this [legal] instrument and not first become active when there are concrete plans for an attack,” he said. “Then it can be very quickly too late,” he added.

The police union leader noted that the French police were able to quickly home in on the suspect because of internet research and called on the German government to quickly adopt legislation that would allow German authorities to store and retain internet data.

Separately, a German Jewish leader condemned the French massacre, and said it should be regarded as a “warning signal for Germany. The problem of Islamism has been “played down, misjudged and underestimated,” Charlotte Knoblauch said in Munich.

“Hostility toward Jews is growing rapidly among Muslims living in Germany,” said Knobloch, the former head of the Central Council of Jews in Germany, while calling on politicians and society as a whole to not hide from these problems.

The Central Council of Muslims in Germany condemned the Toulouse killings and warned the media against using the attacker’s propaganda to try to explain the violence.

That would “make a mockery of the victims and hurt Muslims worldwide,” said council chairman Aiman Mazyek said in a statement on Thursday.

He said the council was “deeply shocked over the deaths from the attacker” and had already expressed his sympathies to the Jewish community in a letter to the president of the Central Council of Jews in Germany, Dieter Graumann.

The Muslim council was very appreciative that French President Nicolas Sarkozy invited both Jewish and Muslim representatives to the presidential Elysee palace.

“That was an immensely important signal,” the statement said. It “showed that the attacker’s goal of inciting religions against each other backfired.”

The statement said, “there is no justification in Islam for such baseless and shameful acts.”