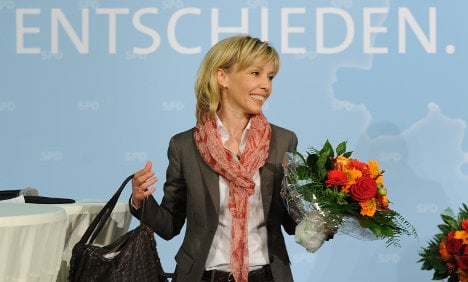 Schröder-Köpf, a former journalist at Germany’s mass-circulation Bild newspaper, was elected over Sigrid Leuschner, an SPD stalwart who had been the party’s top woman in the state parliament since 1994.

While Leuschner, 61, will now have to vacate her seat in the Lower Saxony parliament in favour of Schröder-Köpf, 48, Gerhard Schröder will end up in charge of their household, including dogs and children, Die Welt said on Thursday.

Schröder-Köpf was initially viewed sceptically by many in the party, concerned that the fame and attention she attracts could be a problem, the paper suggested. And the rejection of Leuschner – sealed by votes from her own home district – could be seen as somewhat brutal.

Schröder-Köpf said she was absolutely not looking for a seat in the SPD shadow cabinet, wanting initially to concentrate on her district.

Yet all eyes will remain trained upon her, waiting for any indication that she intends to shift her political focus from Hannover to Berlin.